The Song of the Mother: a sermon on the Magnificat

So we have heard and we have sung a song, the great song, of the mother of Jesus. I’ve promised to be short this morning, but I want to talk a bit about Mary’s song, often called the Magnificat from its first word in the Latin version. It’s a song that has resonated down the ages from her time to ours. It’s got it all: joy, praise, concern for others and the world, and a deep sense of hope for a revolutionary kingdom of God present here on earth that will overturn the powers of the world.

If someone invented a Bible version of Desert Island Discs, and I had to pick a single passage, then Mary’s song might be well it. Martin Luther (perhaps not the first person that comes to mind when talking about Mary) wrote about the song that “She sang it not for herself alone, but for all of us, to sing it after her”.

There’s so much to say about it but today I want to focus on what Mary’s song can say to us about a mother’s love, which seems appropriate today for anyone who’s had a mother or is a mother or lives with a mother. I’m going to talk about three kinds of love that the Magnificat can tell us about: joy, risk, and justice. Mary’s song sits within a very long Jewish tradition of powerful women singers: Miriam in Exodus after the parting of the Red Sea, Deborah the judge, Hannah the mother of Samuel and Judith who questions the faith of Israel’s ruling class. Although she talks about herself as lowly, and although the status of women in 1st century Palestine was pretty bad, her song is full of power.

So that’s the first expression of a mother’s love in the Magnificat: heartfelt joy. It’s a lesson we can all learn from, joy towards God and joy towards those we love.

The next kind of love is that of risk. All relationships have risk inherent to them. There are common images of Mary and Jesus in the history of art. Here is one, of her cradling the infant, and it’s found in many places  – this statue is in St Matthew’s Church here in Northampton.

Once a baby is born, it enters the world and becomes subject to all sorts of risks. That is the case whether the baby is the son of God, or any other human being. Mary talks about this one less in the Magnificat, but soon after Jesus’ birth (also in Luke’s gospel), she was warned about it by Simeon, who said that “a sword will pierce your own soul too”.

And from the moment Jesus was born, he was in a place of risk. He was born into poverty, in a borrowed place. His family had to flee into exile for fear of his life. His ministry was with the marginalised and the outcasts. He was pilloried by the state as a dangerous radical, betrayed by his friends, and put to death. No wonder Mary’s soul was pierced.

So there’s another image of Mary cradling Jesus. This is a version of the Pieta, the image of Mary holding the dead body of Jesus after his crucifixion. It’s by a German artist, Käthe Kollwitz, whose own son was killed as a soldier in the First World War. Many of her images are of mothers and children. Kollwitz knew about the risks of love. So did Mary. But loving someone, in a dangerous world, always involves risk.

Mary’s message to us is that it’s a risk worth taking.

Mary’s song tells us about one more form of love: a cry for justice, for your own children but also for all the children of the world.

The history of world is full of mothers who have sacrificed things for the sake of their children (yes, fathers too, but more often mothers). I’ve watched a couple of TV documentaries recently about food poverty in Britain. One of the most shocking parts was the number of times that mothers were shown going without food so their children could eat. In a rich country it is simply unacceptable that this should happen. But it’s something mothers have always done. This is another picture from Käthe Kollwitz about how this was in the depression of the 1920s in Germany.

And because it’s mothers who so often sacrifice things, it’s often mothers who call for justice for the world. Mary’s song is a statement of extraordinary radicalism. She says that God casts down the mighty and sends the rich away hungry. As the picture says in the style of a Pentecostalist church, “sing it again, Mary!” 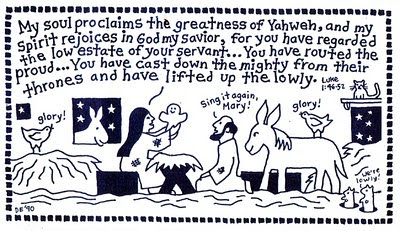 The Peruvian theologian Gustavo Gutierrez, who was the first to talk about liberation theology, talks of the great promise of the Magnificat, writing that “[its] thanksgiving and joy are closely linked to the action of God who liberates the oppressed and humbles the powerful. The future of history belongs to the poor and exploited.”

For those of us who have a decent income in a rich country, that puts us in an uncomfortable position! But it’s a very clear statement about justice. William Barclay wrote that: “There is loveliness in the Magnificat but in that loveliness there is dynamite. Christianity brings about a revolution in individuals and revolution in the world.” Mary’s song makes it clear to us: a world in which there is hunger and food banks and cities with vast wealth on one street and grinding poverty on the next – that is not the world of God’s kingdom. God is on the side of the oppressed and the marginalised, the people with whom Jesus spent his time.

The Song of Mary gives us a threefold statement about love for Mother’s Day, and a challenge for us all: love with joy, love with risk, love with justice. Amen.