The Open University: institution or movement?

So I spent this morning at a meeting of the School of Computing & Communications (we no longer have departments at the OU, rather Schools). The improbable setting was a hotel that forms part of Stadium MK, the impressive football stadium built for the MK Dons, complete with a view straight from the meeting room over the pitch: 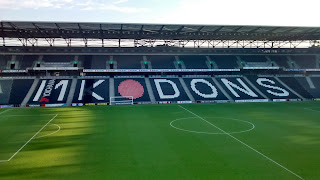 Our main topic was the OU's developing academic strategy, which depending on your perspective is either: a worthwhile & necessary response to an increasingly challenging external environment; or a power grab by senior management; or a well-intentioned attempt to build an overarching strategy albeit with some questionable details. Or perhaps a combination.

What it's not is exciting. Because strategy documents never are. It simultaneously says too much and not enough. No especial criticism there of the strategy's authors, who I'm sure in fact are doing their best; it's the nature of such documents.

But I got quite exercised during the meeting, as I have from time to time reading recent OU strategy documents, about whether it helps us to achieve our mission. The OU was established with a clear mission: "open as to people, open as to places, open as to methods, open as to ideas" (often referred to as the 'four opens'), an idea first formulated by Geoffrey Crowther in 1969 on his installation as OU Chancellor and retained ever since. That is, we are not established to make profit, to become the top university for research, or even necessarily to be the largest university in student numbers. But we are established with a cause of social justice: to bring education to people who wouldn't otherwise have it, in places that they wouldn't otherwise have it. The methods and ideas change with the times - the mission is an adapting one - but the openness and social justice remains in place.

However, on the train home I was reading a chapter of a fascinating new book by post-evangelical author and pastor, Brian Maclaren, The Great Spiritual Migration. Brian writes about social movement theory (drawing on the work of Greg Leffel), in the context of churches but the work has more general application. He distinguishes between three forms of human organisation: communities, groups of individuals and families with dependence on the same environment; institutions, which serve communities by seeking to preserve and enhance particular aspects of their lives; and movements, which 'organise people to articulate what's wrong with particular institutions and propose what should be done to make things right'. Others have made this distinction in a number of places; David Bosch (again from a church context) wrote that 'The difference between an institution and a movement is that one crosses boundaries the other guards them'.

Institutions are vital; they are needed for continuity, for getting things done, for giving people stable jobs. And movements are vital: they are needed for energy, for asking difficult questions, for challenging and changing the status quo. So which is the OU? I think it sits in tension between the two, of movement and institution. It has an excellent history as a movement - it's concerned with mission, with innovation, with challenging norms, with asking difficult questions. But it has achieved its impact through being an institution: having large module teams, media teams to shape academic work into attractive forms, processes to ensure high-quality materials, support structures for students.

Also today I listened to a podcast of a deeply inspiring speech by veteran LGBT and (other) human rights campaigner Peter Tatchell, on receiving an award from the Royal Society of Arts. He said two things I really liked. He described the goal of Outrage (the LGBT campaign group he led for years) as follows:


Our goal was nothing less than revolutionary - a peaceful, cultural revolution in values, laws and institutions.

And in conclusion he said that his guiding principle as a campaigner was:


Don't accept the world as it is - dream of what the world could be, and then help make it happen.

Peter Tatchell perfectly embodies the behaviour of people in movements - standing out, unafraid to challenge, with a clear goal in mind. He took many personal risks and made sacrifices (he has been beaten up many times). And the quotes from him are perfect descriptions of working within a movement.

The Open University is an institution, and it needs strategies. But it also needs to dream of what the world could be, and help make it happen. And for that it also needs to be a movement.
Posted by Magnus Ramage at 21:16 No comments: