Salaam aleikum. Shalom aleikheim. Peace be with you! These phrases all mean the same, and are the common daily greeting for Arabic and Hebrew speakers. And in Jesus’ time, the same was true. Whenever you read the gospels you’ll forever find Jesus saying “peace be with you”. He says it to his disciples, to crowds, to strangers. He says it when he appears to the disciples in the upper room after his resurrection. To our eye it’s a distinctive greeting but it was a common way of talking in Aramaic.

Nonetheless, the theme of peace is one that can be found throughout the whole scriptures. We’ve heard two examples, from the Old Testament prophetic tradition and from the epistle of James. I could have selected very many more. God promises peace to the people of Israel in many different places. The prophecies of the coming Messiah in Isaiah call him the prince of peace and tell us how beautiful are the feet of those who proclaim the gospel of peace. Jesus tells us that blessed are the peacemakers, he tells many different people he has healed to go in peace. In the long series of teachings to the disciples before his crucifixion, he says “Peace I leave with you; my peace I give to you”. Similarly, throughout the New Testament epistles, we find the blessing of “grace and peace”.

Peace is everywhere in the scriptures. If you’ve been following the services here at Abington Avenue since the start of the year, you may recall that we’ve had a series of sermons on the fruit of the Spirit. Jane [Wade, our minister] reminded us back in January that Paul very clearly uses the singular fruit, not the plural fruits, in the Greek original as well as our English translation. Living in the Spirit brings fruit which has many different aspects, but they’re all joined and connected. Paul lists nine aspects of this fruit - love, joy, peace, patience, kindness, generosity, faithfulness, gentleness, and self-control. And today we are looking at peace.

But what do we mean by peace? It’s a powerful word. In the all-age talk, Becky has shown us several symbols of peace – the candle over here, the dove, holding up two fingers, the nuclear disarmament symbol and the origami cranes. When I was a child in the 70s and 80s, I was taken on many peace marches and demonstrations. Now these events and symbols and causes are vitally important acts of Christian witness, and they all cluster under the name of peace. Sometimes they actively promote peace. But sometimes they’re mostly about the rejection of war and the weapons of war. And as many people have said, peace is not just about the absence of war, it’s about something active. In the words of Martin Luther King, “True peace is not merely the absence of tension; it is the presence of justice”. 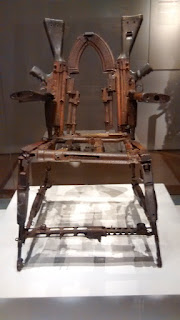 Micah shows us what that active peace looks like. It begins with putting away the things of war and turning them into useful objects, with beating swords into ploughshares and spears into pruning hooks. Or in modern terms, turning drones into solar panels, Kalashnikov rifles into water pipes. A couple of years I saw an amazing sculpture from Mozambique at the British Museum, a chair made from old rifles. Uncomfortable to sit on, but a much better use for them.

Micah has nations not learning to fight each other, and instead sitting down in their own places, their own homes, without any fear of attack or persecution.

Imagine that. Imagine if the vast sums spent on the military across the world, more than $1.5 tr. last year, could be redirected to ending poverty, to ending inequality, to ending hunger, to ending disease. Imagine if the brilliant minds across the world who waste their lives inventing more clever ways for people to kill each other, put their skills to better use. Imagine if all the lives destroyed by war, whether of soldiers or civilians, were freed up to live happily. Imagine Syria without war. Imagine Iraq without war, Afghanistan, Somalia, all those places which have been devastated and destroyed.

Micah says: go ahead, imagine it. Because these days will come. Because the Lord has spoken it. And blessed is his name, hallelujah.

Brian Wren, the hymn writer, has a lovely poem about peace and war which sums up these things well. It reads:


Say ‘no’ to peace; if what they mean by peace
Is the quiet misery of hunger,
the frozen stillness of fear,
The silence of broken spirits,
the unborn hopes of the oppressed.

Tell them that peace is the shouting of children at play
The babble of tongues set free, the thunder of dancing feet,
And a father’s voice singing.

Say ‘no’ to peace if what they mean by peace
Is a rampart of gleaming missiles, the arming of distant wars,
Money at ease in its castle and grateful poor at the gate.

Tell them that peace is the hauling down of flags,
The forging of guns into ploughs; the giving of fields to the landless
And hunger a fading dream.

Because we all know about the other kind of peace. It’s the peace that happened in Bosnia, in Northern Ireland, in Nicaragua, in Ukraine, in Palestine. It’s the kind that may well take shape in Syria, because nobody can think of a better kind. The guns fall silent, the killing stops. But the communities remain unreconciled, the conflict goes on, the hatred and bitterness and recriminations are not healed. And acts of injustice continue, small or large. Hopes wither, lives become set in despair. It’s like a dry grassland in the summer, that kind of peace. Eventually – whoosh! – along comes a match and sets it alight again.

But in some ways this is still easy. It’s not so hard to imagine learning not to hate Donald Trump. Implausible, but at least conceivable. But peace, true peace, is also about day-to-day living. Last week, Jane talked to us about gentleness, and peace is closely related to gentleness. To love our enemies, we must love our neighbour, and to love our neighbour, we must love those we see every day. Dorothy Day, one of the founders of the Catholic Worker movement, put it like this: “I really only love God as much as I love the person I love the least”. We have to learn how to be peaceful within ourselves, within our souls, on a daily basis.

That’s not an easy call. We’re human beings. We fall short of love. I love my children more than words can express. Yet I get cross with them on a regular basis, I shout at them, I get grumpy with them. I’m hardly alone in that – I imagine all the parents here could tell a similar story. We need God’s grace to find that love, to show that love.

And the letter of James gives us some thoughts on how to show that love. The key word throughout the passage we heard from James is wisdom. In the Hebrew Bible, the idea of wisdom is a crucial one. It has little to do with book-learning and a lot to do with inner learning. It’s the feminine aspect of God, the first creation who sat beside the Creator since the start of time. The book of Proverbs says of wisdom: “Then I was constantly at his side. I was filled with delight day after day, rejoicing always in his presence, rejoicing in his whole world and delighting in the human race.” So it’s a deeply Jewish idea, and when it came into Christian thought, it became connected with the Holy Spirit, who came down from heaven in the form of a dove, that symbol of peace.

In the letter of James, we’re presented with two forms of wisdom. There is a false wisdom which is based on envy and ambition, and which James calls earthy, unspiritual, even demonic. This false wisdom leads to disorder and to evil practices. Envy and ambition fester in the soul, they lead us to hate those who we think might have more than us or to be doing better than us. But then there is another wisdom, which leads to peace, and which has something of the same flavour as the fruit of the Spirit described by Paul. This wisdom, this fruit, is about thinking of others. It’s about being merciful. It’s about putting others’ needs before your own. It’s about consistency and integrity.

The last two verses in the passage from James are translated in a really helpful way in The Message bible:


Real wisdom, God’s wisdom, begins with a holy life and is characterized by getting along with others. It is gentle and reasonable, overflowing with mercy and blessings, not hot one day and cold the next, not two-faced. You can develop a healthy, robust community that lives right with God and enjoy its results only if you do the hard work of getting along with each other, treating each other with dignity and honour.

I love the idea of doing the hard work of getting along with each other. It’s hard work. Let’s name it plainly. Human communities are full of divisions. This church community is full of divisions. There are arguments in this church, disagreements and hurts that have existed for years. That’s normal enough for human communities, but it’s not the way that God intends for us. There’s nothing wrong with disagreement. Conflict is a natural part of human life. The problem is how you respond to conflict – anger and even violence create future problems, but so does leaving conflict to fester unresolved. The way of peace, the way of wisdom, involves seeing conflict and treating each other with dignity and honour.

And if we can find this way of wisdom, if we can recognise that within every other human being there is a spark of divine goodness, much richer and deeper and more important than anything that divides us from them and anything we think they’ve done wrong. If we can see these things, can see that we are all children of God, then truly we can become peacemakers.

And then we will be able to love our neighbour, to love our enemy. We will become peacemakers. And then everyone will sit beneath their vine and their fig-tree, and nobody will make them afraid. Because this is the promise of God, and this is the fruit of the Spirit, this is the path of wisdom. May it be so for each one of us, in our everyday lives and with those around us. And may it be so for our tattered and battered world, full of children of God who cry out for peace. May God grant peace to us all, and may we respond with love and with joy and with peace to all those we meet. Amen.