Reflections on power and beauty: a visit to north Wales

We were on holiday in North Wales last week - staying at Afonwen Farm (much recommended) between Criccieth and Pwllheli. Lots of great visits to beaches, a walk up Snowdon, a trip on the Ffestiniog railway, a visit to Greenwood Forest Park, castles, small towns with good local food, and the brilliant Cadwaladers ice cream. A splendid holiday. But three places have really stayed with me and have made me reflect on modern and historic Welsh identity: Aberdaron, Blaenau Ffestiniog, and Conwy castle. 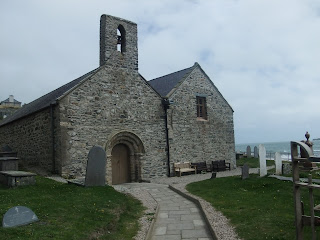 Aberdaron is at the very tip of the Llyn peninsula, and a stunning place. We visited because of a guidebook recommendation, but also because we recently joined the National Trust and liked the sound of its small museum, Porth y Swnt (and to meet up with old friends also staying in the area). The museum was small but excellent - great audio guide, really good children's activity pack, lots of interesting exhibits. While in Aberdaron, we visited its rather charming and very old church of St. Hywyn, where the poet RS Thomas was the priest for a decade. I believe that Thomas wrote his great poem The Bright Field (which happens to be the theme of this year's Greenbelt Festival) during the time he served in Aberdaron. Thomas wrote:

I have seen the sun break through to illuminate a small field
for a while, and gone my way
and forgotten it. But that was the
pearl of great price, the one field that had
treasure in it. I realise now
that I must give all that I have
to possess it. Life is not hurrying

on to a receding future, nor hankering after
an imagined past. It is the turning
aside like Moses to the miracle
of the lit bush, to a brightness
that seemed as transitory as your youth
once, but is the eternity that awaits you.

The landscape and the beach at Aberdaron were also very special, and the light and the cliffs stay with me from there just as much. Another lovely poem of Aberdaron, inscribed in stone outside Porth y Swnt, by the bard Cynan Evan-Jones, talks of "the cliffs of Aberdaron and the wild waves on the shore". 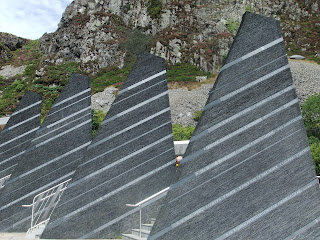 But enough of the beauties of Aberdaron. The next day, we travelled up on the Ffestiniog railway from Porthmadog to its destination, Blaenau Ffestiniog, a very different place. The railway was built to carry slates from the mines down to the sea. Now it carries tourists who like steam trains (including our very excited five year old) up a lovely valley - a really good ride. And then it ends in Blaenau Ffestiniog, a town that grew on slate mining and is now thoroughly post-industrial, with less than half of its peak population and hardly any slate still mined. It has all the hallmarks of a post-industrial town: properties in the estate agents are eye-wateringly cheap and a drab, depressed feeling surrounds it. The people are working hard to reinvent it as an outdoor centre, to use the mines for high-adrenaline activities, but to me it didn't feel like a happy place at all. We found an excellent second-hand bookshop and the occasional attempt to make art out of the place but otherwise I was glad to get back on the train. 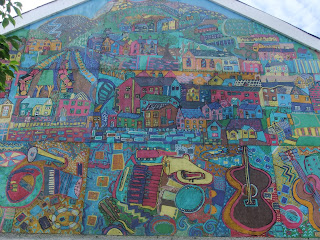 Blaenau Ffestiniog seemed to me to have the tragedy of so many industrial centres, from Durham coal towns to Clydeside shipyard communities, that have lost their purpose and their energy. And it's a marker of the power of capitalism to wreck lives and places. Industry came to Blaenau (and other parts of north Wales). It despoiled the landscape - there are huge piles of slate waste all around the town. It drew people in to a life that was once difficult and dangerous but had purpose and community. And then the industry left. The capital was withdrawn, to seek new opportunities in cheaper job markets in other places. And emptiness and despair were left. Capitalism is power. It comes, it steals, it leaves ruined lives behind it. 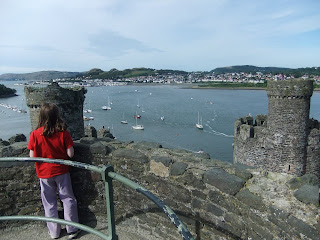 The last place that stays with me combines the two experiences of Aberdaron and Blaenau Ffestiniog, being about beauty and power in one place. Conwy Castle was built to control. One of King Edward I's 'iron ring' of castles (along with Caernarfon, Harlech and Beaumaris in north Ales) to put the Welsh in their place, to take away for ever their nascent drive to independence. Welsh people were forbidden from living within the walls of Conwy. It sits on the estuary of one of Wales' great rivers, where it meets the north coast, controlling the north-south and east-west routes at once. It ought to be a horrible place. And yet, time weathers power. Instead of soldiers, it was covered in tourists. Some were English, some were Welsh, some from other places. Time has given Conwy beauty. The town is charming. And it's set in the most amazing location, with the hills behind and the estuary in front. We stayed in the youth hostel high above the town and the views were stunning.

I'm not Welsh, so it would be impertinent of me to reflect too much on modern Welsh sources of power and beauty. The country is rich in natural beauty, in resources, in a people of versatility and poetry. But the powerful (the Welsh elites themselves as well as the English) have treated it very badly. May the country learn over time to recover from the powerful, and to find its own power amidst its own beauty.
Posted by Magnus Ramage at 21:32 No comments: