Don’t domesticate the dove. I read that phrase online this week. Don’t make the Holy Spirit into something small, contained, Encountering the Holy Spirit is an awe-inspiring and life-changing event. It’s not cosy. It’s not simple. It’s not easy to put into words. Pentecost is such a familiar story that we can too readily forget the vastness of the experience. It was so profound that the disciples were left scraping for metaphors to describe it. And yet it changed their lives. And experiences with the Holy Spirit can change our lives too. 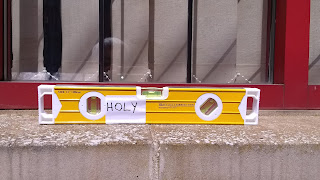 Now the Bible is full of occasions where human beings encounter the divine – Abraham, Moses, Isaiah, Jesus at his baptism, Paul on the road to Damascus. They often struggled to put their experiences into words, beyond umpteen variations on the theme of ‘wow’. But images of wind and fire are common ones. Recall the pillar of fire which accompanied the Israelites in the desert, or the hurricane in which God appeared to Job, or the still small voice after the wind and fire when God spoke to Elijah.

These would all have been very familiar images to the disciples gathered in Jerusalem. With the idea of Pentecost as the birthday of the church, and all the talk of different languages and different peoples, it’s easy to lose sight of the fact that this was a deeply Jewish occasion. All of those Parthians and Medes and the rest were members of Jewish communities scattered around the Eastern Mediterranean who had come to Jerusalem for the festival of Shavuot, which was originally the first of two harvest festivals, but was venerated as the time when the Torah was given to the Jewish people on Mount Sinai, again with fire and cloud and wind. That event was in many ways the birth of the people of Israel – they came together through persecution and flight from Egypt, but they gained identity when God gave them a way of living. In the same way, the followers of Christ had come together through his preaching and example, but gained identity as a group when God gave them the Holy Spirit.

This year and next, Shavuot falls on the same day as Pentecost though the complexities of religious calendars means this isn’t always the case. This year, Muslims are also celebrating Ramadan just now, which celebrates the revelation of the Qu’ran to Muhammad. Both faiths celebrate by reading their scriptures right through – many Jews stayed up all night yesterday into today to read the Torah. The disciples at Pentecost received a different sort of revelation of God, a direct experience of his power and energy. They received not just the word of God, but the very breath of God – because the word for breath and spirit are the same in both Hebrew and Greek. That’s the point Ezekiel makes about the dry bones being breathed into life. The followers of Jesus, still reeling from his death and the uncertain events of his resurrection and ascension, were empty and lifeless. And then God came and breathed on them. And nothing was ever the same.

The phrase about domesticating the dove that I quoted comes from an author by the name of Danielle Shroyer. She also writes: “The Spirit of God has been released into the world. Not contained but set free. Not limited but expanding. And what else would we expect, if this Spirit of Life is indeed the One through whom God raised Jesus? This is the Spirit of Life, who God has called not only to raise Jesus to new life but to raise all of creation to new life. Without Pentecost, we’d just be people who tell Jesus’ story. With Pentecost, we’re people who live into Jesus’ story.”

So I say again: we need to be careful not to underestimate the power of this Holy Spirit and not to make the story sound too comfortable. Because it’s not a comfortable experience. Let me talk personally. Some of you know that I spent 15 years as a Quaker. If you’ve not been to a Quaker meeting for worship, it’s an interesting experience. The congregation sits in a circle in a simple room, listening for the voice of the Holy Spirit. Nobody speaks until they feel compelled to do so by the Spirit, and there are no set words or preachers. But the power of the Holy Spirit can be really compelling, a physical as well as spiritual experience. I remember once having words come to me, and wanting to speak, but not having the courage – and afterwards I felt awful. Another time I was in the annual business meeting of British Quakers, with several hundred others, and we were at the end of three days of discussion and decisions and in a closing period of worship which was normally kept silent. But words came to me about community and love, and I could not be silent, and I was shaking and my ears were buzzing but I was convinced that I was instructed by the Spirit to speak, and so I did; and afterwards others told me that they found value in whatever I said. Because at the moment I was not speaking my own words, I was speaking the words that were given to me.

Now Quakers, for all their many good works in peace and justice and social change that this experience of the Holy Spirit has made possible, are a quieter bunch than charismatics. The ecstatic experiences of raising your hands and singing for half an hour, or speaking in tongues, or healing with the touch of hands – those experiences don’t appeal to me, they feel rather alien and frightening – but I understand where they’re coming from. They come from a place of compulsion by the Holy Spirit, of being filled and being transformed and being a channel. Not my will, not my voice, but that of the Lord.
Of course that wasn’t a new experience at Pentecost. Peter’s sermon, once he had done pointing out that his colleagues weren’t drunk because it was too early in the day, which I’ve always thought is a good start to a sermon, Peter then quotes the prophet Joel talking of God pouring out his spirit on all flesh, and all kinds of people prophesying. A commentator on the book of Joel has some vivid words to say about this passage: “Whenever God pours out his divine energy, people are transformed; they behave like madmen, they dance frenziedly; seized by ecstasy they undress and lie naked on the ground. Moreover they have visions and enter the heavenly realm.” Quite a party. And very threatening indeed to the political and religious establishments. The indwelling of the Holy Spirit does some odd things.

Here’s something else that the indwelling of the Holy Spirit brings: justice and equality. Again this has a precedence in the festival of Shavuot. In the book of Leviticus where that festival is commanded, the next verse reads “When you reap the harvest of your land, you shall not reap to the very edges of your field, or gather the gleanings of your harvest; you shall leave them for the poor and for the alien”. The giving of Law is bound up with the giving of social justice, because it comes out of a place where the Israelites were oppressed and both law and justice were responses to that oppression. I talked earlier about the parallels with Ramadan, and you may know that the Muslim practice of zakat, the giving of a proportion of one’s income to the poor and to charity, is a key feature of Ramadan, as much as fasting. Law and justice are joined together in both faiths.

The Spirit is moving in our world today. It brings life to situations of hopelessness. The valley of dry bones in Ezekiel is the valley of the shadow of death. We all know of valleys like that in our world. There are places of death, like the waste processing towns of China, or the polluted lakes caused by industrialisation in Russia, or the desolate landscapes caused by oil sands extraction in Canada, or the impacts of plastic throughout the world’s oceans. There are places of spiritual death too, the lands where violence has stripped away hope from the people, or where financial austerity has meant life has become harder and harder, or where homeless people are walked over by the rich on their way to fat-cat jobs. And yet in all of these places: the Holy Spirit is present. And it might sound glib and just the vain prattling of preacher-talk, but God has promised to the bones that he will cause breath to enter them, that he will bring life back to them, that he will restore hope to them. And it might feel like nothing much, or it might feel like a rushing of wind and tongues of fire, but the Day of Lord is approaching, when all pain will cease, and when hope will come. And the Spirit is always with us. This is the promise of the day of Pentecost.

I’d like to close with some words from a book entitled The Fire Runs about mission and the work of the Holy Spirit in the world. It was written by a Church of Scotland minister called Ian Fraser who died last month at the age of 100. His book was the basis of a conference on liberation theology which I attended in St Andrews around 25 years ago. I remember that in one act of worship we were offered images for the Holy Spirit, and the two which have always stayed with me were the words catalyst and disturber. The Holy Spirit changes and mixes and transforms, it brings the fire that forms the spark that sets alight change in our world – that’s the catalyst. And the Holy Spirit shakes us up, it comes in with a mighty wind that blows away our preconceptions and our prejudices and our past experiences that stop us from following the path of Christ – that’s the disturber. The Spirit was a catalyst and a disturber on the day of Pentecost, and may it be so for all of us today. Here are the words of Ian Fraser in his poem:


Like fireworks lighting up the night
the Holy Spirit came;
dejected Christians felt the touch
of living fronds of flame -
and suddenly the world was young
and nothing looked the same.

For Jesus’ nearness gave them heart
to venture, come what would:
the love of Jesus bade them share
their house, possessions, food:
the mind of Jesus gave them speech
the whole world understood.

This is the Spirit who, today,
new daring will inspire
and common folk are given gifts
to change the world entire:
the sparks which flew at Pentecost
started a forest fire.

Posted by Magnus Ramage at 20:25 No comments: