Jonah and the Whale song - an extended version

The song "Jonah and the Whale" is much beloved at Sunday Schools. It's jolly but (like lots of Sunday School versions of the Jonah story) ends when Jonah came out of the fish, and misses out most of the interesting parts of the book of Jonah. In particular, there's no mention of the tree that Jonah shades under and is subsequently eaten by a worm, a strange little parable wrapped inside the whole strange parable that is the book of Jonah.

Here's the original song (written by Hugh Mitchell in 1957 - it's often uncredited but is listed by the Churches Copyright Licensing Authority). The tune can be found in various places online and in an organ version by Canon Quentin Bellamy:

And here's our second verse (written by myself and my daughter): 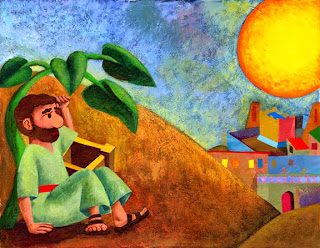